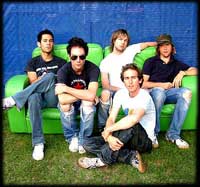 After playing to the college crowds and perfecting their musicianship and skills in the New York City and Los Angeles areas Maroon 5 were signed by Octone Records. "Songs About Jane" was their debut June 2002 selling over three million copies and breaking into Top 40 Radio with the single "Harder to Breathe." Their acoustic EP has sold over 500,000.

While winning many prestigious awards including MTVVideo Music Awards and People’s Choice Awards Maroon 5 are still down to earth guys. M5 donated their services to Tsunami Aid: A Concert of Hope. The band stated that Maroon 5 are excited to be Headliners for the 2005 Honda Civic Tour due to Honda’s trendsetting with their environmentally friendly cars. The band has launched a special website to promote important information about the planet with links to environmental organizations that can help make a difference.

Adam Levine is a judge on the hit TV show "The Voice".

Get your tickets today for the best seat selection.

Checkout our information page for details and don't forget parking.

Houston Rodeo Tickets Online is your source for Maroon 5 tickets and all your entertainment tickets. Order tickets online .