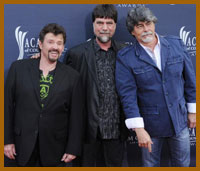 With 21 number one hits Alabama was huge in the move from traditional to progressive Country music back in the 1980’s and 90’s. They haven’t played the Houston Rodeo since 2003 and this could be their last appearance.

Here's your chance to see the band that ruled the 80s and 90s.

Here's some of their number one Billboard magazine's country singles: