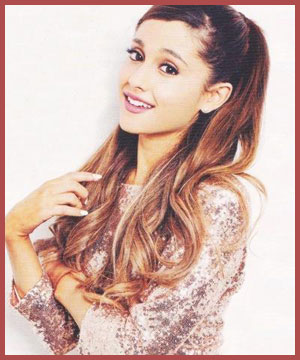 From playing Cat Valentine on Nickelodeon’s Victorious to becoming Breakthrough Artist of the Year Ariana Grande has already achieved success. Her hit songs “Break Free”, “Problem” and “Bang Bang” have allowed her to spend 26 weeks in the top ten of Billboard Hot 100.  She possesses a four octave light lyric soprano vocal range. No doubt her voice has earned her some wonderful praise from other artist.

Ariana Grande was born in Boca Raton, Florida. She attended Pine Crest School and North Broward Preparatory School.  She made her national television debut singing “The Star Spangled Banner” for the Florida Panthers. In 2010 Nickelodeon’s Victorious premiered to the second largest audience for a live actions series with Arian Grande playing Cat Valentine.  She became more interested in a music career and was signed by Republic Records. Three years were spent recording her debut album “Yours Truly” which was released in August of 2013 and debut number 1 on the US Billboard 200 album chart. In August 2014 she released her second album “My Everything” it also debut number 1 in its first week. In November 2014 she appeared on the Country Music Awards performing with Little Big Town.