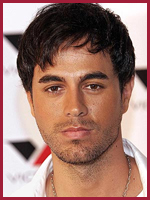 Enrique Iglesias appeared at the Houston Rodeo on MARCH 6, 2012.