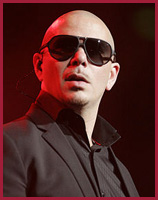 He will captivate the audience with his lyrics mixing English and Spanish languages. Songs such as “Fireball”, “Time of Our Lives”, “I Know You Want Me (Calle Ocho)”, “Timber” and “Fun” are all fan favorites.  Pitbull was chosen by FIFA and Sony Music to write and record “We Are One (Ole Ola)” alongside Jennier Lopez and Claudia Leitte, which served as the official song of the 2014 FIFA World Cup.  In June 2014, Pitbull received a star on the Hollywood Walk of Fame.